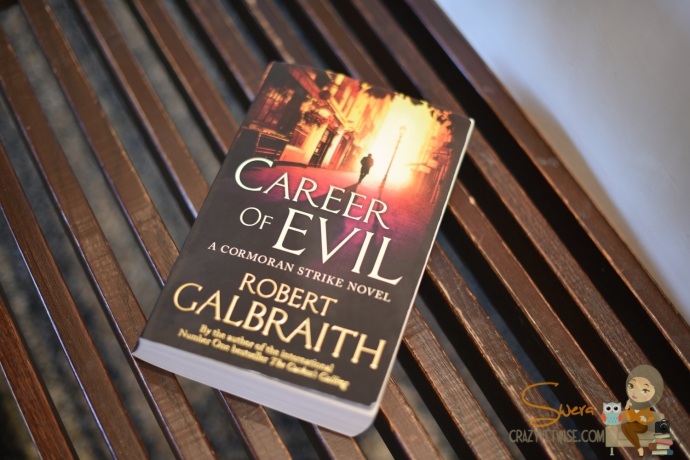 This is by far the best Cormoran Strike & Robin Ellacot sequel/series. Not because of the crime events or the murders that are happening, oh no! It’s because of the development of the relationship between Robin & Strike. In the first book, they’ve just met, but Strike talks personal when Robin finds him wasted in a pub. In book 2, the reader sense there’s something between the two of them but can’t actually determine if it’s real or from the reader’s imagination. Now, in this book, we find out what’s really going on between them, or maybe some of it. I don’t want to talk about it because I don’t want to have spoilers in my review!

The last page … Oh the last page, kept me on my nerves! How am I supposed to wait for the next book to find out what really happened! That cliffhanger will leave Strike & Robin lovers/fans tensed.

Now, let’s talk about the story. Part of a severed leg ends up in Robin’s hands and a letter that has a song tattooed on Strike’s mother’s body. Who could have know about it? There are 3 men who are most likely to send Strike body parts, one of them is the killer but how can they find out when the police themselves are pushing them away from the investigation.

Through out the story, you get to see how Robin’s character develops when we learn what really happened to her when she was in college and the reason behind her dropping out. Also we find out how Strike really lost his leg and what happened to the rest of the soldiers with him. These incidents affect their judgments and leave them vulnerable.

Now, don’t expect this book to full of events and mysteries in terms of crimes and criminals. I actually found the crime/mystery plot moving kind of slow. This book actually focuses on the relationship between Strike & Robin as I said before.

And I’ve just learned that HBO is teaming with BBC to adapt these series and make them a TV Show. It will be called The Cormoran Strike Mysteries *shake it* Can’t really wait 😀